Cell Gene Therapy and Viral Vectors: How Can They Be Effective for Compromising Diseases and COVID-19? 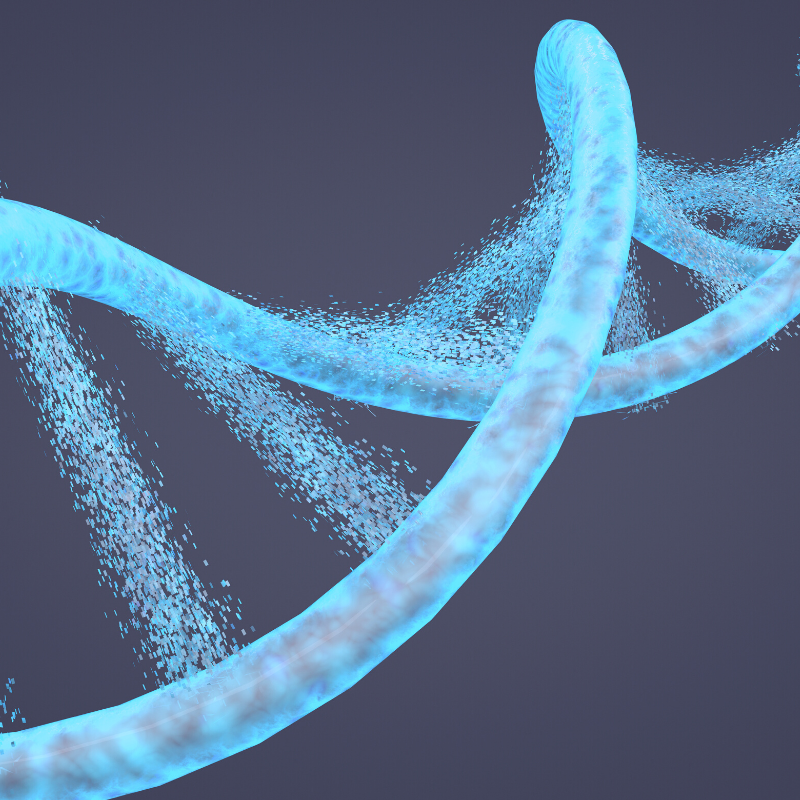 Who would have thought that genes and cells can be manipulated in such a way to treat and cure compromising diseases? Cell gene therapies, also known as monoclonal treatment, have brought a new era in the biotech industry as a way of treatment for many compromising diseases like cancer, diabetes, genetic disorders, blindness, muscular dystrophy, and even Alzheimer’s. Now, these therapies are aiming to treat COVID-19.

My previous blog posts covered the important subjects of Sources of Cross-Contamination in the Vaccine Industry and Viral Controls and Prevention of Cross-Contamination in the Vaccine Industry. We learned that contract manufacturing operations (CMOs) and Contract Development Manufacturing Operations (CDMOs) facilities offer a great advantage with the implementation of clean suites (modular units for the separation of individual patients), along with associated controls for the vaccine and cell gene (monoclonal) therapy industries, which significantly reduce potential risks for any cross-contamination.

Vaccine and cell gene operation share similar technologies. For example, companies have implemented effective and efficient processes, including single-use technology to minimize the risks of contamination, in addition to process controls and preventive tools. Most of all, when few of the CDMO’s locations include cell gene, patient-centric small-scale production, they utilize a process called Autologous. In this process, a patient’s own IV bags or injectables are sent to hospital units after their specific cells/genes are manipulated/edited for their specific treatments’ therapies.

These technologies mean we can look ahead to the future in the Biotech/Biologics space – with a focus on the role of cell gene therapy and viral vector application. The novel COVID-19 vaccine production demands have brought the opportunity for vaccine and cell gene operation to join efforts to continue providing vaccines and therapies for individuals in need. Moreover, these operations can contribute to the vaccine volume need to complete the inoculation process, which is even more important now that Johnson & Johnson’s vaccine distribution has been delayed.

Ahead, I continue my series by sharing the latest in cell gene and viral vector manufacturing processes, and how these processes have significantly contributed to the treatment of compromising diseases, including the novel COVID-19. 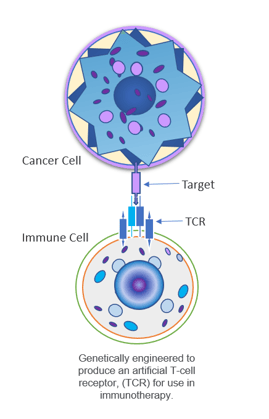 Emily Whitehead’s story is a thrilling example of cell gene therapy at work. Her T-cells were genetically re-programmed to become completely free of an aggressive cancer in her blood, acute lymphoblastic leukemia, that almost took her life at the age of 5. Emily has been free of cancer for 8 years, and she is still in remission and leading a happy and healthy life.

Emily was the first child to receive T-Cells re-programmed to fight her cancer cells, a process developed at the University of Pennsylvania. To initiate Emily’s treatment process, doctors removed millions of T-Cells from her blood, (white cells-immune system cells). It was her last hope since she relapsed twice after chemotherapy, and doctors were running out of options.

During the cell gene process, cells are genetically engineered in the laboratory, and good genes are inserted that enable the T-Cells to kill cancer cells. The new genes instruct T-Cells to attack B-Cells, which are a normal part of the immune system that turn malignant in leukemia. The programmed T-Cells, called Chimeric Antigen Receptor cells, or CAR T-cells, are administered back to Emily’s bloodstream by injection or by IV process. Then the cells multiply and start destroying the cancer.

Used in this way, T-Cells are “living drugs” and can be administered this way only once or twice, unlike a pill drug that the body eliminates, and is taken over and over again for life. 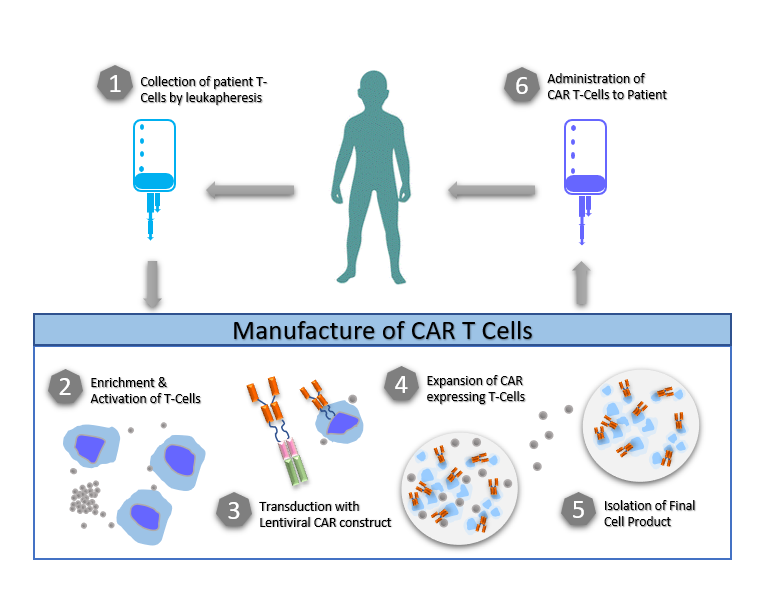 Cells are the basic building blocks of all living things, and genes can be found deep within cells. Genes are small sections of DNA that carry genetic information and instructions for making proteins, which help build and maintain the body. Without the correct proteins, we face compromising diseases. Everyone has around 20,000 genes and two copies of each of their genes, one from each parent. Small variations in genes result in differences in people’s appearance. The nucleus controls cell function while chromosomes inside the nucleus are thread-like structures made up of DNA tightly coiled many times around proteins called histones. Genetic diseases happen when a critical piece or whole section of DNA is substituted, deleted, or duplicated. These changes are called genetic mutations. As we all know, some serious genetic diseases caused by genetic mutations can be passed to future generations.

Differences Between Cell and Gene Therapies

With cell therapy to treat diseases, cells are modified outside the body before being administered into the patient. The cells may originate from the same patient (Autologous) or from donors (Allogeneic), where cells are manufactured in large scale at CMO facilities and then administrated to any individual with the same conditions. 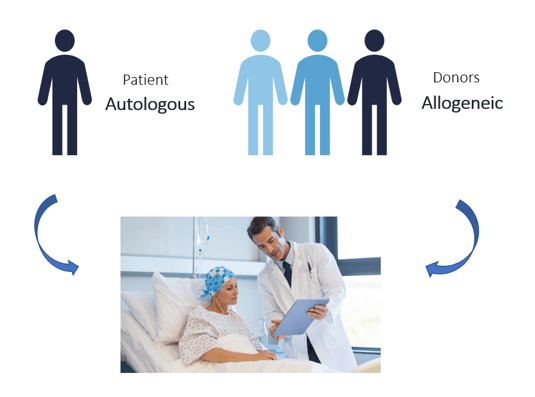 Gene therapy will treat diseases by replacing, inactivating, or editing (introducing genes into cells), either inside the body (In-Vivo) or outside the body (Ex-Vivo). Some therapies are considered both cell and gene therapies. This type of therapy will alter genes in specific types of cells when they are administered into the body.

There are two types of vectors: viral and non-viral. Viral vectors are currently a delivery vehicle used in FDA-approved gene therapies. Non-viral techniques are still being studied as a safe and effective way to deliver genetic material to cells for therapeutic effect.

There are 3 major steps for the cell manufacturing process: isolation, expansion, and sorting. As I shared on my previous blog on the prevention of cross-contamination in the vaccine industry, isolation is part of the upstream process, expansion is part of the downstream process, and finally sorting is the fill and finish process. All phases are critical during the manufacturing process for avoiding contamination during all required interventions. Also as noted in the previous blog, process and safety controls are also very important to deliver a quality, effective final product that can be administered to humans.

There are many critical steps throughout the entire process, like storage conditions of the cells, harvesting process to increase volume for cell multiplications, and continuously testing to ensure final product quality. Everything starts on a small-scale process at the lab.

Cells are modified based on human conditions and then manufactured on a large-scale level involving all process requirements. 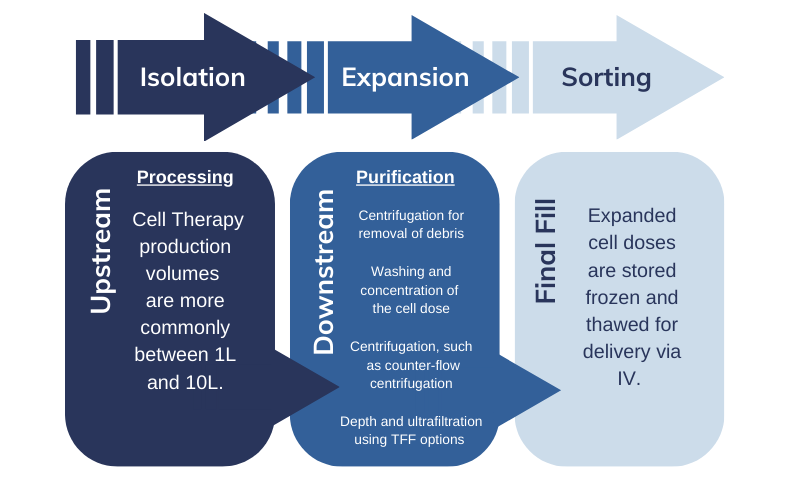 Many pre-formulated cell lines that can treat any individual conditions have already been developed in the laboratory. For some patient-specific treatment, cells are collected and studied at the lab to be manufactured (replicated) after being modified for a cell therapy session, like in Emily’s case. Specific receptors from cancer cells are evaluated, and T-Cells are genetically engineered to produce an artificial T-cell receptor to match cancer cell receptors for use in immunotherapy. That way, once it is administered back into the patient’s bloodstream, they attach to those cancer cells, finally destroying them.

With the urgent need for a vaccine, major companies like Pfizer-BioNtech and Moderna have demonstrated that gene therapy is a viable strategy for developing vaccines to combat COVID-19. Both used mRNA technology to teach the body how to fight the virus, and both used mRNA to program a person’s cells to produce many copies of a fragment of the virus. This fragment then stimulates the immune system to attack if the real virus invades the body.

SARS-CoV-2 was utilized as a template since 80% of the genes are identically found in COVID-19 virus. Since it is only known that one of the species involved in the virus mutation is the bat, it is very difficult to develop specific vaccines when you are unable to identify the other host proteins. However, vaccines have been proven to be effective and safe based on the clinical studies.

Other companies utilized viral vectors by inactivating a piece of the virus. With this method, the key factor is to prevent being infected to stop mutations, and, subsequently, virus spikes and variation.

The Food and Drug Administration (FDA) issued a guidance, with immediate effect, on manufacturing considerations for licensed and investigational cellular and gene therapy products during the COVID-19 public health emergency, called manufacturing guidance. Sponsors investigating or marketing these products should pay special attention to the discussion in these documents, as the FDA outlines its approach to COVID-19 and development considerations with respect to these personalized therapies.

The Manufacturing Guidance supplements the FDA’s June 2020 guidance on Good Manufacturing Practice Considerations for Responding to COVID-19 Infection in Employees in Drug and Biological Products Manufacturing. However, because cell and gene therapy (CGT) manufacturers may face special challenges, FDA recommends that CGT manufacturers perform risk assessments to identify, evaluate, and mitigate factors that may allow for the transmission of SARS-CoV-2 through CGT products. Any plans should consider the FDA’s view that allogeneic products may be associated with a higher risk of infection compared to autologous products.

Cell gene therapy and viral vector application have significantly contributed to fighting major compromising diseases, even though it is not a new technology in the biologics space. Just thinking about modifying an individual’s DNA is a major shift in medicine. Not only can it treat an aggressive leukemia like Emily’s, but cell gene therapy can also restore sight and treat skin conditions, cardiovascular diseases, Alzheimer’s, and Parkinson’s. It also offers hope for hemophilia.

Doctors and scientists hope these treatments will be a one-shot cure. Researchers have shared more miraculous cures of patients with rare and life-threatening diseases who were treated with experimental therapies. There are many more successful stories like Emily’s, clearly demonstrating a revolutionary era in the immunotherapy treatment using cell gene therapy. As it stands, North America keeps the top position of the largest region in cell gene therapy.

The responsibility and the complexity of the monoclonal and vaccine industries is enormous, and this industry needs highly skilled subject matter experts in the field to consistently maintain an efficient, high quality, and safe process. CMO/CDMO industries are facing many challenges, especially during these unprecedented times. These challenges impact production timelines and, most of all, the required controls throughout the entire process. With the novel COVID-19, the industry is facing new challenges and opportunities to improve and fast track their processes. For example, the Pfizer COVID-19 vaccine has opened an opportunity to treat other conditions like multiple sclerosis, with the hope of eradicating this condition in 2 years.

Without a doubt, Immunotherapy is bringing a promising future in the Biotech/Biologics industry for treating many compromising diseases. If you would like to learn more about viral vectors in particular, read my next post in this series: "What Are Viral Vectors, and How Do They Work?"

If you feel you need support in this area, EGLS has the expertise in both cell gene therapy and viral vectors, so we can guide you through all the possibilities.

All images created by Sandra Acosta. 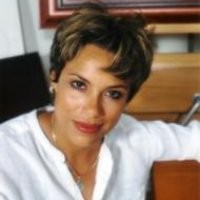 Sandra Acosta has over 30 years of experience in the pharmaceutical and biotechnology industries. Her expertise ranges across areas such as project management, engineering/validation, compliance/regulatory, and sterile processes, on an international scale. In 1995 she created, managed, and directed BioWell, a specialized microbiology laboratory that served international pharmaceutical and biotechnology companies and agencies. Most recently, as a project manager, Sandra led a team across multiple workstreams for a site remediation project at a global biopharma company. In her role as Director of Biopharma Solutions, Sandra is responsible for the creation and support of client solutions on many levels, from launching projects and providing ongoing oversight and direction, to assessing and engaging talent. Sandra is an instrumental part in leading the expanded delivery of positive outcomes and deliverables to clients. In her role as a PMO, Sandra also led additional efforts on the redesign of the sterile process for the novel COVID-19 vaccine production for commercial purposes.